‘GWYN – Ancient god of Glastonbury and key to the Glastonbury Zodiac’ is the title of the important new book by researcher, quester and contributor to these forums, Yuri Leitch. 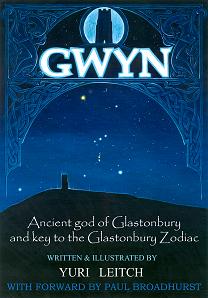 In the book Yuri traces the appearance, rise and fall of Gwyn through the ages taking in evidence from the historical, mythical and archaeological record.

The book is available in a limited, signed and numbered edition from Temple Publications at their site here: http://www.thetemplebooklet.co.uk/Gwyn.htm.

Not content with writing his debut book, the prolific Yuri has also contributed an article on the Somerset Parallelogram to Issue No. 10 of The Temple booklet.

Congratulations, Yuri, and best of luck with the new book.

As many of you will know from the forum posts, the Black Alchemist has launched his own microsite on MySpace.com.

Featuring photos of Black Alchemist artefacts, background articles and FAQs the site also contains details of the new "remastered" version of the classic psychic questing book which Andrew Collins plans to release on the 16 October 2007 (to coincide with the 20th anniversary of the Great Storm.

The main site URL is http://www.myspace.com/theblackalchemistonline but the RSS feed link is also probably worth saving so that you will automatically be notified of any updates – http://blog.myspace.com/blog/rss.cfm?friendID=180116296

All in all a thoroughly entertaining site and a very clever way to publicise an upcoming book.